The Bor Mine in Serbia

Labour and landscape in the 20th century

Mining has been taking place in Bor, eastern Serbia, for centuries - intensified and industrialised since the discovery of copper ore in the early 1900s. This blog explores the 20th century industrial heritage of mining in Bor. 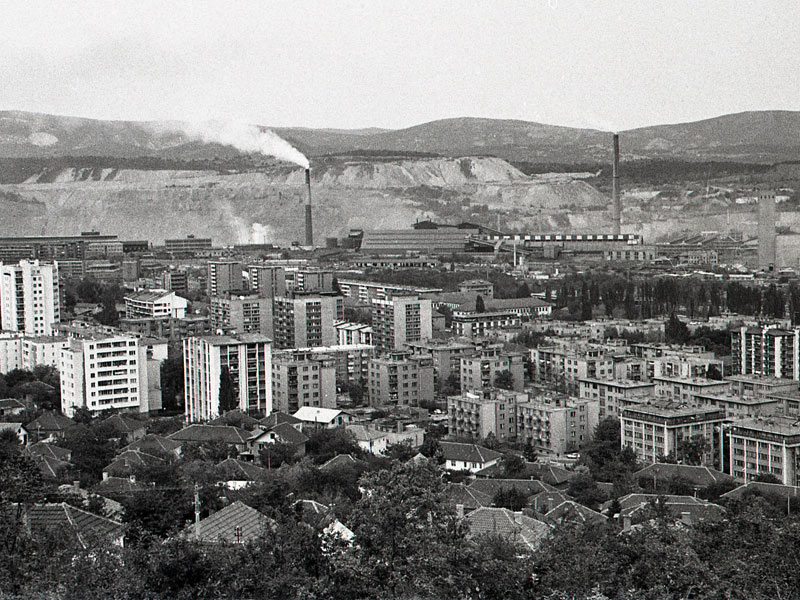 In eastern Serbia, where the Bor Mine is located, archaeological excavation confirms that even the Romans were involved in mining in this area. At the time, only gold was sought for.

The rapid development of the area began in the 20th century, with the purely accidental discovery of copper ore in 1902, after official exploration had been terminated.

RELATED: Explore this gallery relating to the mining industry

Many local legends surround the discovery of copper-bearing ore in Bor. One of them is about Paun Meždinović, a young man from the locality, who found the first greenish copper ore lump. During his lifetime, Paun remained known as the boy who discovered copper-bearing ore.

The area underwent intense urbanisation, transforming its previously rural environment into a highly-industrialised mining region, changing not only the natural landscape of the area but also the occupational structure of its inhabitants.

After the ore had been discovered, Đorđe Vajfert, an industrialist from Pančevo, who invested in the exploration of the area, sought the help of foreign capital in order to be able to initiate exploitation.

He managed to obtain support for this endeavour in France. After having signed a contract with the Mirabo Bank in Paris, the French Society of the Bor Mines, the Concession St. George (La Compagnie fran_ç_aise des mines de Bor, Concession St. George) was formed on 30 September 1903.

Copper exploitation progressed rapidly. As early as 1904, the mine employed around 80 miners and, during that year, 5,500 tons of copper ore were excavated, resulting in 774 tons of pure copper. In the first five years, the French company capital was increased from the initial 5.5 to 7 million French franks in gold.

For the most part, the work was manual. Copper was transferred to the nearest train station in Vražogrnci by ox-carts until 1911, when the Bor-Metovnica railway was built. The expansion of the mining-related facilities, particularly the smelter and the flotation system, brought about environmental pollution from the sulphuric fumes created in the ore-melting process. This had an indirect influence on the increase in the price of food products in the area, as well as protests from the local population involved in agriculture.

Due to the economic crises in the early 1930s, the labour cost in the Bor Mine was drastically decreased. However, by 1933, there was a recovery, initiating the mine’s golden age, which lasted until 1940.

After the end of World War II, the period of socialism was marked with great working-class enthusiasm at the Bor Mine. As early as 1945, the Bor Mines and Smelters public company was founded by a Yugoslav Government decision.

Since the equipment was outdated and there were not enough funds for modernisation, digging was performed manually, using drills. Often, the workers used two drills, surpassing the pre-war performance first by 90%, and then by up to 160%. The number of voluntary extra hours was up to 96,000 during those years, which is unbelievable from the modern market economy perspective.

Nevertheless, this brought about the recovery of the mine and the foundation of the Bor Mining and Smelting Combine in 1961, which marked the beginning of an era in which the workers managed the mine. Innovations included technological modernisation, continuous employee training, the participation of everyone in decision-making processes and the presence of women in the work processes.

Bor continued growing along with its industry. In 1947, it was given the status of a city, with more than 12,000 inhabitants, many of whom worked at the mine. The population quickly increased, with new apartments built to house workers. By the mid-20th century, due to an intense influx of workers from all over Yugoslavia, Bor was home to people from nineteen different nations who spoke seven different languages. New schools were built and, in the spirit of self-management, courses for workers were held all the time, ensuring the continuous education of workers - exemplified by this photographs of miners in the library.

By the end of the 20th century , after decades of exploitation, the share of copper in the copper ore decreased.

RELATED: View more photographs of the mining industry in Bor

During those years, the landscape of Bor and the surrounding area has been completely changed. The urban core, formed around the mining colony, grew into a proper city, whose landmarks were chimneys and horizons of mined and burnt land. This landscape serves as a warning of the high price of copper exploitation, and has resulted in the permanent environmental pollution of the area.

Did you or your family work in mining in Bor or elsewhere? Share your story and help us tell the story of Europe through our working lives in the past and the present.

This blog post is a part of the Europeana Common Culture project, which explores varied aspects of our shared cultural heritage across Europe.